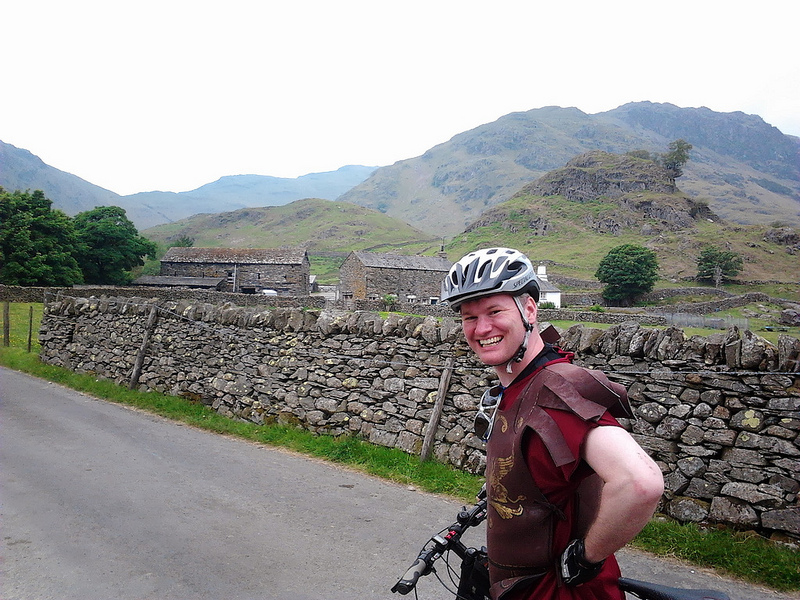 When we first launched as The Pendsey Trust, we put feelers out into the Diabetes Online Community, looking for inspiration and support. We were lucky enough to find Tim Brown, a blogger from shootuporputup.co.uk, a popular diabetes community site in the UK. Tim wrote our first interview (see here) and shortly afterwards, took on the commitment to fundraise for us through a particularly special challenge.

We find out more.

Tell us a bit about yourself. You are a pretty prominent figure in the diabetes online community- how did you get to where you are today? And what makes you tick otherwise?

Until 2005 I was a mild-mannered 28-year-old lawyer living in Edinburgh. However, towards the end of the year I started getting very tired and felt unwell most of the time. Thinking it was something not too serious, I popped along to my GP for a general check up. The check up didn’t go so well and I found myself two hours later in the Edinburgh Royal Infirmary being diagnosed with type one diabetes. To be honest, I’ve had better days.

I started on insulin injections the very next day and spent the next few weeks learning everything I could about type one – I’d known precious little about it before diagnosis. Once I had got the basics of diabetes sorted I started to search around on the Internet for more information about managing the day to day ups and downs of the condition.

I didn’t really like any of the websites or blogs that were then available (sorry to everybody who was writing then!). In general I found them far too negative – you’re doomed, your feet will rot off by the time you’re forty, life is miserable, woe is me and so on. I didn’t think any of these things, so I set up my own blog to write about diabetes in a slightly more positive way, combined with some degree of sarcasm and deadpan humour. In the first week or two of running the blog I was fortunate enough to bump into Alison Finney on-line and after exchanging many emails I invited her to become my co-writer. This was an incredibly serendipitous meeting and I’m glad to have both found a great co-writer but also to have made a great friend (get the puke buckets!)

We agreed between us a simple style guide – diabetes would always be the star – not us – and if we didn’t have anything to write about we wouldn’t write anything. It seems to have worked so far, I guess.

We hear you are taking part in a crazy adventure to raise money for the Pendsey Trust. What are you planning to do – and who else will be doing it with you?

Good question! On 6 -10 June my friend Stephan and I are planning to cycle across Britain linking up the major Roman sites of northern England, chiefly Hadrian’s Wall. This inspired our Roman theme – we intend to ride it while dressed as Romans. Specifically, Stephen as a Centurion (he has a cloak) and me as a gladiator (I don’t have a cloak). It’ll take us four days and we plan to include two of Britain’s hardest hills – namely the Hardknott Pass, Eskdale and the Wrynose Pass, Little Langdale. These may, in fact, kill us.

What inspired you to take part in this challenge? Where did the idea come from and have you done anything else similar before?

I used to do a lot of hill walking and rock climbing and had done quite a few expeditions to the Swiss Alps in summer (very pretty) and the Scottish Highlands in winter (terrifying). Stephan has done loads of cycling, including John O’Groats to Land’s End two years ago. In the pub one evening, we decided to team up and plan another adventure and so the Roman Rumble was born. Dressing up as Romans was Stephan’s idea; I’m not sure where it came from. I suspect he was drunk.

Why did you choose to ride for the Pendsey Trust?

We weren’t actually planning to do the Roman Rumble as a charity ride. But after interviewing Lucy for Shoot Up we changed our minds and decided to see if we could raise a pound or two on the back of the project. The things that appealed about the Pendsey Trust were it’s long-term objectives – providing education so someone can get a better job and so buy their own insulin is a million times better than just providing insulin. We also liked the fact that overheads are low and all our cash will be going to where it’s really needed.

How are you training for your adventure? What special considerations do you have to make when training, as somebody with diabetes?

I’m training by cycling around the Pentland Hills every weekend and Stephan has been cycling backwards and forwards to work (however, he only works two hundred yards from his house). Exercise really makes a difference to how you absorb insulin and so, through trial and error, I’ve been adjusting my insulin levels to match how much cycling I’m doing. This is made much easier by being attached to an insulin pump, rather than using conventional injections. The fact that I have a £4,000 pump provided free of charge by the NHS shows how incredibly lucky we are to be diabetic in Britain.

How’s the fundraising going?
Not too badly – it’s slowly ticking up but I intend to do one more great push before we go!

Have you got any ideas of crazy fundraising stunts you would like to try in the future?

This very much depends on whether the Hardknott and Wrynose Passes do actually kill us. If we do happen to survive I may never want to see a bike or Stephan ever again.

What is your message for those who are considering taking on a fundraising challenge?

If you plan to do it dressed as a Roman you will find there is a bewildering range of costumes on offer. Picking the right one has been one of the most time-consuming elements of the planning process, so allow plenty of time. Also, finding a B&B in Keswick at a reasonable price on a bank holiday weekend borders on the impossible.

Tim and Stephan will be departing on their journey on 6 June 2013. If you are inspired by their story and want to know how you can get involved in a fundraising event for The Pendsey Trust, please visit admin@thependseytrust.org.

About the author Lucy